Success for Latymerians in the Quintin Head 2017 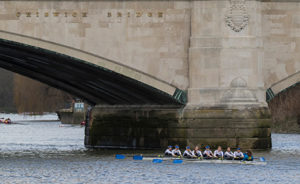 The Quintin Head, which charts its course from Hammersmith to Chiswick Staithe has grown from a small gathering to one of the major ‘eights’ races on the Tideway Thames, with more than 200 eights now competing in this annual meet.

This year’s race (28 January) saw wins for both our J15 girl and J15 boy crews, with yet another win in the ‘Alan Watson’ and a debut win in the newly named ‘Sir Steve Redgrave’! A second ‘matched’ J15 boys’ eight came third in the same division – within five seconds of its peers over a 5km course – showing the depth and quality of the current squad.

The weekend also saw successes for our recent alumni: Latymerians Tom Phelps (2016) and Orlando Nixon (2015), rowing for Thames RC first eight, at stroke and four respectively; they took the Senior pennant and won the Quintin Head overall as fastest crew of the day. Five seconds behind them, rowing in the bow seat for University of London BC first eight, Ben Freeman (2015) won the Elite pennant; whilst Zach Youell (2014) won IM2 rowing at bow in Thames RC second eight. Kate Griffiths, back temporarily from Dartmouth (US), also competed for Tideway Scullers School finishing second in WIM1.

Congratulations all – a great way in which to start the new year!