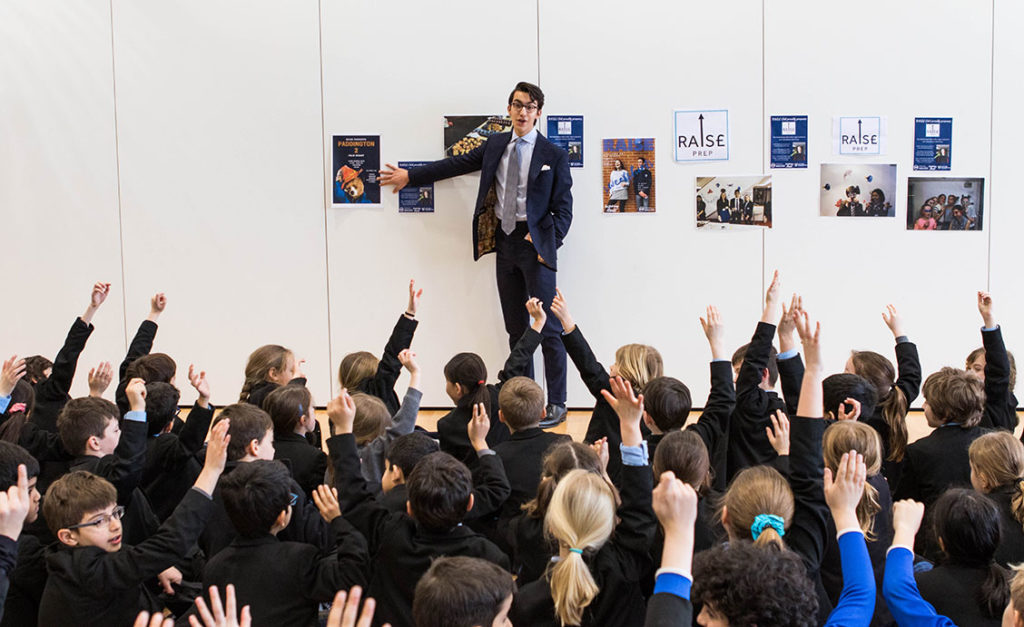 We are thrilled to announce that Latymer Prep School has launched ‘RAISE Prep’.

RAISE started as a student-led fundraising club in the Upper School, raising money for the Upper School Bursaries Appeal, which provides financial support for pupils to attend Latymer regardless of their family circumstances. Now, the Prep’s fundraising activities for the Prep Bursary Fund will come under the ‘RAISE’ umbrella.

RAISE Prep was launched in an assembly to Prep pupils by RAISE Senior Ambassador, Alex. He explained how RAISE works in the Upper School, highlighting the fact it is very much student-led. He also encouraged pupils to start thinking about their own fundraising ideas.

Many of the Prep’s existing events raise funds for the Prep Bursary Fund, such as the ever popular Prep Disco. The first official RAISE Prep fundraising event is a swimathon planned for the summer term – dates to be confirmed.

Pupils will also be encouraged to put fundraising suggestions in a suggestion box outside Mrs Rutterford’s office. Prep staff, the Foundation Office and sixth form RAISE club members will work with the pupils to make the best ones a reality.

“The Prep students have been fundraising for the Prep Bursary Fund through existing events to this point, but going forwards the Prep will be a part of the wider RAISE group. This is exciting as it will provide excellent opportunities for students from across the Upper and Prep schools to work together, united by a mutual passion for breaking down the financial barrier to a Latymer education.”

This year, RAISE in the Upper School has already contributed over £4,000 to the Bursaries Appeal. This was raised through its Christmas Fair stall, sales of RAISE sweatshirts, a Krispy Kreme sale and a bake sale. Their annual Film Night will be held next Friday (23 March), and Prep students are invited to attend with a parent to enjoy Paddington 2 – tickets are available here here. RAISE Sweatshirts, which were designed and are being sold by Upper School students are also now available for Prep pupils – all profits will go straight to the Prep Bursary Fund.