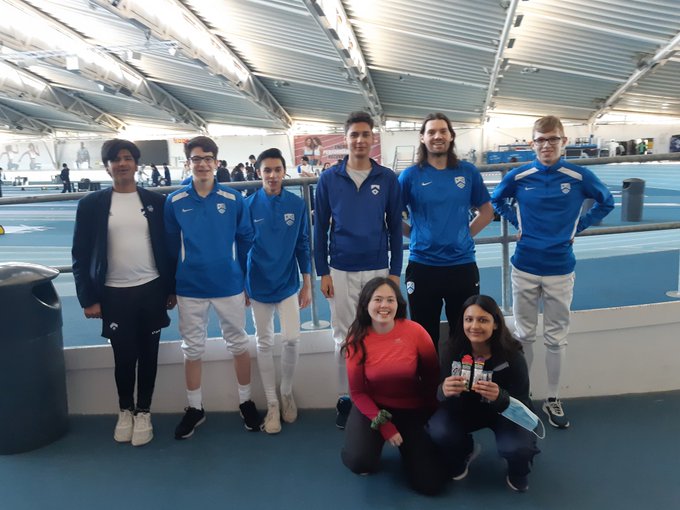 The Public Schools Fencing Championships returned this year after a two year hiatus as a result of Covid-19, and was hosted in its new home at the Lee Valley Athletics Centre, London.  Latymerians from Years 8-13 took part with overall results as follows:

“Whilst there were no medals, there were some excellent performances which bodes well for the future of fencing at Latymer,” said Mr Boteler, Head of Fencing. “Currently the fencing club is fairly ‘bottom-heavy,’ and school matches have tended to be a bit of a mixed bag this year — we don’t have the depth that other schools do in senior year groups — so it was lovely to be able to see some students who have been fencing ‘up’ an age group (or two!) compete individually and prove their worth against students their own age,” he continued. “As well as the results, what really impressed me was the camaraderie and team spirit among the squad: if they weren’t fencing, they were at the side of the piste cheering each other on. Credit should go to Captain Eugenie for fostering such an excellent team ethic, and I would like to thank our excellent team of coaches – Yosif, Zak and Alex – from Dream Fencing for their hard work and support of our fencers.”

Maxi and Demir did incredibly well with 5th place results in the boys’ ‘Mount-Haes’ (Year 8 & 9) foil and sabre respectively. Elena, Eugenie (both girls’ senior epee) and Cordelia (girls’ Mount-Haes epee) all had excellent last 16 results. Sam (boys’ Mount-Haes foil) and Zhaniya (girls’ senior epee), two relatively inexperienced competitive fencers, did well to make the first knockout round and Owen (boys’ senior sabre), who only began fencing in September 2021, should be very proud to have made the last 32 (second knockout round), as should Idris (boys’ Mount-Haes sabre). Sidd’s 12th place in the girls’ junior sabre shows promise for next year, Adam (boys’ junior sabre) and Teymour (boys’ senior sabre) both performed admirably and Megan’s 19th place in the girls’ senior sabre after only a year of fencing was impressive. In the boys’ Mount-Haes epee, Constantine made an excellent comeback in his first knockout fight, from 3-0 down to triumph 7-5, Zeno and Sasha were composure personified, as was Marko in the boys’ senior foil, and Elijah showed good tactical nous.

Congratulations to Millfield who were crowned Overall School Champions for the ninth year in succession. The three day event contains 18 individual competitions and six Master-at-Arms trophies, which are awarded for being the best across all three fencing disciplines.  The Public Schools’ Fencing Championships is by far the largest fencing competition in the country, and is arguably the largest youth fencing event in the whole of Europe.