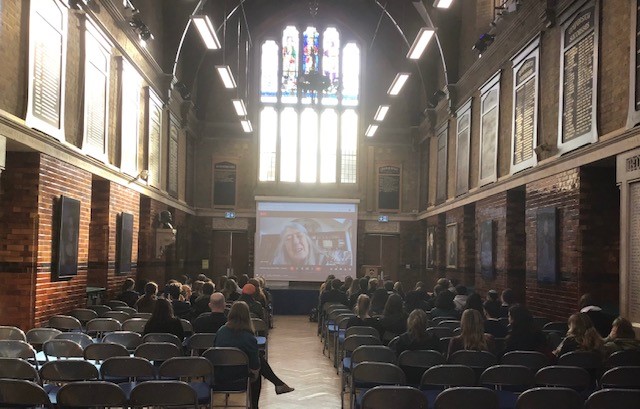 The event was organised by the Society founder, Y12 student, Bee. “She’s a real hero of mine and I didn’t think she’d say yes when I wrote to her. When she replied to say that she was a bit busy but was happy to do it, I just couldn’t believe it, I was literally jumping up and down,” said Bee. “She’s so inspiring, I love how she wants to make classics accessible to everyone. So many of us have been inspired by her.”

The Q&A was wide ranging with questions submitted in advance to make the best use of time. From diversity in Ancient Rome to possible careers for classicists and who she’d most like to meet from the Ancient World, Professor Mary Beard delighted the students and teachers in the Main Hall and joining remotely from Schools around London.

Bee started the Latymer Classics Society in September 2021. She’s managed to organise a series of virtual talks from classicists around the world. She’s grown the Society’s membership within Latymer and has also been inviting students from partner and other local London schools to join the talks via google meets.

‘I love classics and was keen to learn more and hear from others,” she said. “I thought about inviting classicists to join us for virtual events so that we could then engage more people.”

Bee first reached out to several PhD students at Cambridge University and was delighted when Charlie Pemberton agreed to come and do a talk. Since then Latymer’s Head, Mr Goodhew and Professors from Cornell, Yale, Oxford, Cambridge as well as author and broadcaster, Nathalie Haynes and TV producer Jimmy Mulville have all given talks, sharing their love of classics.

“People are really generous – it’s the magic of classics – it’s something you want to pass on and keep alive,” said Bee.

“After Professor Michael Fontaine from Cornell University had given his brilliant talk on ancient mental health, I then saw it parodied on Saturday Night Live and I couldn’t believe it, it’s so exciting to see classics appealing to such a wide audience.”

“Mr Goodhew was brilliant,” said Bee. “He said that Classics is an amalgamation of so many subjects, history, linguistics, science, english and philosophy. We’ve really used this idea and have done joint events with other clubs like FemSoc and Art History and these have worked really well. I’ve written to lots of schools to invite them to join and what I’d like to do next is to get the recordings of all the talks up on the Latymer Youtube site so even more people can enjoy them,” said Bee.

With talks by Alexandra Olsman from Sotheby’s, Charlotte Higgins from The Guardian and Professor Kirk Freudenburg from Yale University already booked in after half term, it looks like the Latymer Classic Society is going from strength to strength under Bee’s guardianship.