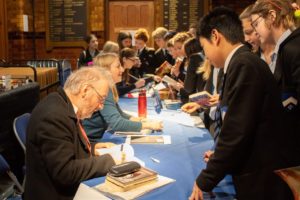 Year 7 pupils were excited to meet historical novelist Paul Dowswell today when he visited Latymer to talk about his book Ausländer, the story of a Polish boy adopted by a Nazi family in Berlin during World War II.

Paul gave pupils a fascinating insight into the Nazi era, with many images and examples of how pervasive the Nazis’ anti-Semitic propaganda was in the 1930s. He showed a doll’s house complete with portraits of Hitler and decorated with Nazi women’s group wallpaper, and children’s picture books depicting Aryan children jeering at Jewish pupils and their teacher out of school. He went on to explain the grim reality of life during that period – that venturing an opinion different to that of the regime was not tolerated and could be punished by death by firing squad or guillotine, and that any of act of rebellion in such a climate demanded tremendous courage.

Ausländer has been shortlisted for this year’s Trinity Schools Book Award (TSBA), the third time Paul’s been shortlisted. After taking questions from Year 7 pupils, Paul signed copies of his books during morning break.

Later he met Year 9 pupils in their history lesson – he described life under Stalin’s regime in Russia, and how he had researched his novel, Red Shadow.