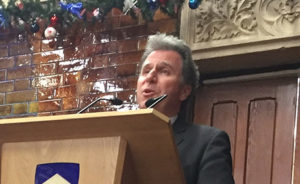 Sir Oliver Letwin addressed the J S Mill Society last week and gave a thought provoking speech to an enthusiastic audience in the Main Hall, on the importance of the constitutional issue at hand surrounding Brexit.

Letwin, the policy brains behind Cameron since his election as leader in 2005 and, until recently, Director of the Brexit Unit, talked about the current conflict over whether Brexit was to be the agenda of parliament or that of the government. Moreover, he outlined the possible issues arising from the process, such as judicial reviews, which will no doubt affect the two-year timetable.

This topical talk provided us with reasons and explanations regarding the referendum and captivated many students.