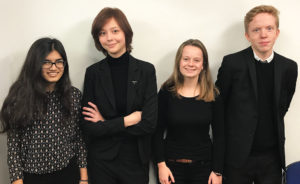 Every year, the National Theatre runs a youth initiative called New Views, which gives students across the country the opportunity to write a one act play on whatever topic the wish. Schools are visited by a playwright, who helps each student with their first draft and gives feedback after the play has been submitted to the competition.

After Emily, Umme, Jane and I set up readings for our respective plays here at Latymer, we got in touch with a theatre owner in Southwark, who offered us one night in the Bunker Theatre. The Bunker is a basement theatre that seats a little over a hundred people, keen to produce plays from up and coming playwrights. Getting a group of actors together, the four of us will put on our plays in the ‘New Voices’ festival on the 12th March.

As someone who has written for most of my life, and plan to continue writing well into the future, it’s an incredible privilege to put on my play at the Bunker. The entire process of writing a play with the help of a professional playwright, facilitated by the school, has been a great experience. I would advise any student who enjoys writing to get involved with the New Views initiative, for as long it’s still running.