Congratulations to Latymer Upper School Boat Club, which entered the most crews of any school or club in this year’s National Schools’ Regatta. Our rowers brought their best performances to each day of racing, which saw them join the top four schools and clubs in winning; ‘Most Medals’, ‘Most Gold Medals’ and ‘Most Champ Medals’. The Boat Club was also quoted on twitter as being ‘the model boat club’ encouraging rowers to ‘train hard have fun get results’.

The National Schools’ Regatta is the largest regatta for junior rowers between 14-18 years old in the UK. Held annually over a May weekend it welcomes over 5,000 competitors who contest 36 different events across the three days racing, of which Latymer entered 29.

Other notable performances included the J15 boys stepping on to beat Kings Chester, the J15 girls achieving fourth in GJ154x+, silver in GJ158+ and gold in GJ158+B, and six octos competing at J14 – the first time any school or club has achieved this. The Y9 boys A and B crews both ranked eighth in their respective events, whilst the Y9 girls demonstrated outstanding depth with B boat winning gold and A boat taking bronze.

Head of Boats, Phil McGee says: “This year has seen Latymer Upper School’s Boat Club offer more entries than we have ever had compete before – and more than any other school or club. It really illustrates the benefits of our inclusive approach to rowing at Latymer, whilst still competing at the highest level in boys, girls, sweep and sculling events. It’s heartening that so many of our rowers are committed to the sport and can experience competing at this level for nationals at a world class multi-lane venue. Well done all athletes and coaches, and thank you to all our supporters. All our performances provide great motivation in the short and long term. We now turn our attention to Henley and GB trials!” 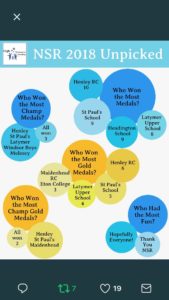