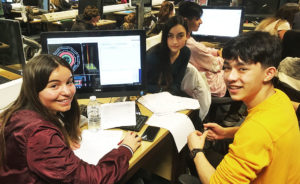 Pupils got to use real data from CERN and then pooled it with results from five other research groups across Europe, via a live video link, to find evidence for the Higgs Boson.

It was a great experience, giving pupils an insight into a fascinating subject as well as a taste of university life, post Latymer!

Review of the masterclass by Varun Randery, Yr12

The Lower Sixth Physicists were invited to a day-long masterclass at Queen Mary University of London. The session centred on Particle Physics, a relatively unexplored area of Physics which has gained much momentum since the creation of the world’s largest particle collider (the Large Hadron Collider, spanning some 27 kilometres through Switzerland and France). With the discovery of the Higgs boson (dubbed the ‘God particle’) in 2011 by scientists working with the collider, academic interest in the field has surged, making it an important area of study, full of open questions.

We started the day with a series of introductions to the work being done at CERN (the research body operating the LHC), studying everyday analogues to procedures used there to analyse data. The search for the Higgs boson was likened to finding a loaded die hidden among countless fair dice. In essence, scientists at CERN study patterns, searching for discrepancies which may provide the answers to longstanding questions within Physics as a whole.

We each had the opportunity to work with real data from the LHC, in tandem with four other institutes in Europe, cataloguing particle interactions using the same tools as CERN’s data analysts. After discussing our results as a group, we joined a video conference with the other participating institutes and CERN itself, where we observed trends over thousands of particle collisions. Soon after, the team at CERN took questions from students, many of which were thought-provoking and related to the wider field of Physics as a whole.

Overall, it was a fantastic experience — a strong insight into a modern, mysterious field of study, with a wealth of potential to be explored by future Latymerians.