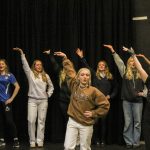 This year’s School musical, Legally Blonde is a notoriously challenging and ambitious piece. Never one to shy away from a challenge, Head of Music, Mr Henwood, knew just who to call to support our students to conquer this piece – Latymerian, Peter Wilson (Class of 2006), who is currently Assistant Musical Director of West End smash hit, Mamma Mia.

“We are very fortunate to have someone of Peter’s calibre supporting our students with this production,” said Mr Henwood. “I’m grateful to him for fitting this in around his professional commitments, sharing his knowledge and experience with our current students.”

Peter joined Latymer Prep in Year 4 in 1996. During his time at Latymer he got involved in many different productions from Shakespeare to a Christmas Carol and his favourite, Sixth Form play, Machinal.  “My love of theatre really began when we went on a school trip to see ‘Jerry Springer the Opera’,” Peter explains, “I saw the conductor playing the piano in the pit and I thought, I want to do that.” Peter credits Mr Henwood for nurturing and encouraging his diverse music tastes (a Sixth Form spent listening to everything from Stevie Wonder to Wagner) and for teaching him to play the school organ, which was then in the Main Hall; Peter went on to become an organ scholar at Jesus College, Oxford. After graduating he went on to do a post grad in Musical Direction at the Royal Academy of Music, then straight onto an 18 month UK tour with Cameron Mackintosh’s production of Oliver! as Assistant Musical Director. He’s worked consistently ever since, in 2016 becoming the Assistant Musical Director for Mamma Mia, which he’s returned to after lockdown. “It’s an amazing show to be part of,” said Peter. “I feel so lucky to be in an industry that people were so desperate to have back in their lives. The pandemic has been so tough for everyone in the Arts, and now that we’ve reopened, we’re seeing audiences as big as they were before, which I’m thankful for.” 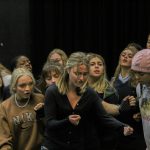 When he got the call from Mr Henwood, Peter said he just couldn’t resist. “Legally Blonde is a really great and really challenging show. I immediately knew I wanted to do it, the tricky bit was finding a way to make it work around my commitments to Mamma Mia and my family. Luckily my wife is a Latymerian and she loved doing music and the shows here, so she understood and has been so supportive; she’s coming to see the show and she can’t wait to come back to the theatre here.”

“We’ve pulled the show together very quickly,” he said.”It’s a really challenging piece and it’s quite a feat to pull it off. It’s been fascinating to see how the students work and think, they’re a really talented bunch and the two students playing Elle are absolutely amazing. I’ve invited some friends to come along and be in the band alongside the students and they’re astounded at the talent here.”“I sang in this theatre when it opened so it’s great to be back and seeing it again and to be able to apply what I’ve done professionally over the last decade at my old School. My advice to the students is to ‘learn your harmonies’ and just remember to enjoy it! They’ve got the chance to be in something like this, in these really high quality facilities, so I just want them to enjoy it whilst they can!  It’s been so rewarding to do this, it feels so good to give something back.” 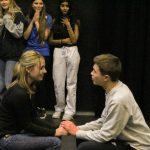 Tickets sold out the minute they went on sale, and when an extra matinee show was added that sold out too.  The run starts this Wednesday, 8 December.

Break a leg to the everyone in the production!