Before they finished the end of their first year, our Year 7 pupils enjoyed their first Latymer Upper ‘Career Day’. 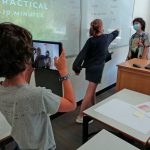 They took part in the One Day Film School run by Young Film Academy which is a well recognised and highly recommended initiative for young people.

Over the course of the day, our pupils learnt how to create a two minute silent film (with music) from a choice of themes using the skills, tricks and techniques that they were taught that day – such as fight choreography and sound effects. While they were having fun, they also picked up valuable life skills such as problem solving, team work, leadership and communication.

The Lower School team then put on an Oscars-style event for them, showcasing all the films and celebrating the pupils’ creativity.

“We wanted to do something special for them as it’s been such an unusual year and start to their time at Latymer,” said Ms Sellars, Head of the Lower School. “They’ve all worked extremely hard this year and demonstrated such extraordinary resilience and adaptability that we wanted to do something really fun that celebrates them and their development over this year,” she continued. “It also gave them an opportunity to spend time with their peers and tutor group which they missed out on during lockdown.”