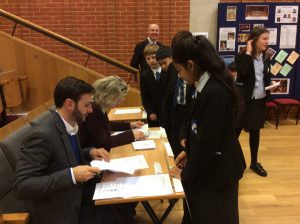 We had a fantastic turnout yesterday for our very own Latymer Election Day with pupils and staff queuing to vote at our onsite polling station (aka the Recital Hall).

Over the past few weeks, Latymer pupils have mirrored the general election with five candidates representing the Greens, Brexit, Conservative, Labour, and the Liberal Democrats. Pupils have been busy campaigning and canvassing across the School – holding public debates, fundraising for publicity, creating persuasive posters and analysing opinion polls.

“This is an extraordinarily important election. First, because not since 1983 have the two main parties offered such wildly different policy programmes. Second, because a Conservative win will ensure Brexit, with all its economic and geopolitical consequences, whilst a Conservative failure to win will prolong the uncertainty and 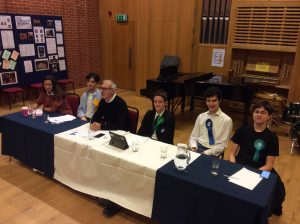 perhaps necessitate a second referendum. By taking part in the school election, whether as candidates, party supporters, journalists or pollsters, students are engaging with these issues, developing their political skills and learning British values.”

Their hard work culminated in yesterday’s vote with a landslide majority win for the Liberal Democrats!

Congratulations go to all those who took part in the Latymer Upper School Election 2019!

Reflections from some of the candidates:

Gabriel, campaigning for the Green Party 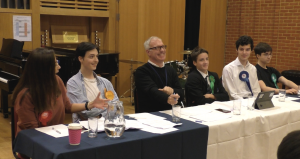 “Initially the Green camp was full of high hopes, but we soon realised the enormous support we had during the European election had dramatically decreased (the Green Party being less popular nationally). We knew the task was hard, but it was reiterated when the initial opinion polls were released, showing a drop of 22% in support of the Greens. What maintained our hope was the high support at school for environmentalism.  As a candidate, my high point was performing in the grand general election debate, something that I am proud of just for being there. I hope that the time and effort can now come to fruition on Friday.”

Erwin, campaigning for the Conservative Party

“Contesting the Latymer election as a Conservative was always going to be tough but I’ve enjoyed the process! Canvassing has enabled me to have many interesting conversations with other students and has hopefully even swayed some of them! Partaking in an interview for a student newspaper was also fun and I enjoyed speaking in the Grand Election Meeting. The Meeting was a chance to debate with other candidates and for the voters to get to know us, so it was great to see such a good turnout!”

Oscar, campaigning for the Liberal Democrats

“As the candidate for the Liberal Democrats, campaigning for the School election has been intriguing. What has really fascinated me is engaging with others and learning more about the concerns people hold, and what factors motivate them to vote for such causes. Nevertheless, the process has given me a unique insight into the difficulties faced by politicians, regarding the art of persuasion and the logistics of campaigning.”