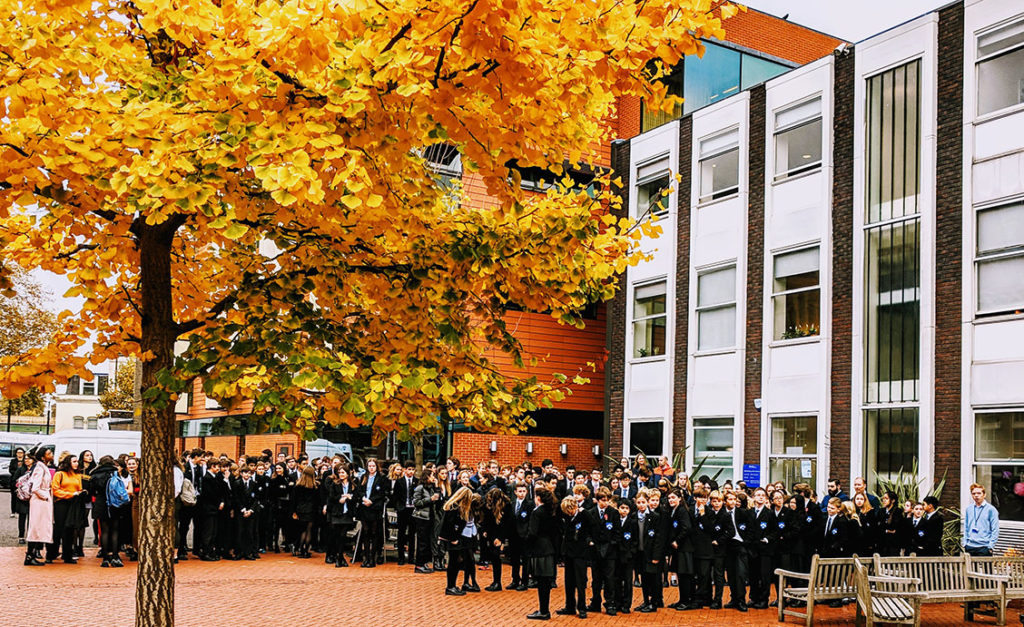 Latymerians gathered together today to mark the centenary of the end of World War One. At 11am the traditional playing of ‘The Last Post’, performed by Ethan Gillespie, was followed by a two minute silence. Always an emotional occasion, the marking of the end of WWI is particularly poignant this year as we remember those who died in the’ war to end all wars’, 100 years ago.

1,234 Latymerians fought in WWI. Of these former pupils, 221 did not come back, but were either killed in action or died of their injuries. Pupils studying at Latymer as the War raged on between 1914-18, were moved to write poems about the plight of serving soldiers; these, collated by our school Archivist Malcolm Smith, can be read here. Over 100 years on, our current pupils have recorded themselves reading these heartfelt words, the films of which can be seen here.

Armistice Day, of course, marks all conflicts. Europe had only to wait a further 20 years after the end of WWI before it found itself on the brink of WWII. Our Head, David Goodhew, has written an article on the remarkable ‘experiment in friendship’ that Latymer Upper School created in 1948 with a German school – the Johanneum, at a time when relations between the two countries were still strained. An uplifting story in the face of such tragedy, David’s article can be read in Tes.

Four years ago, to mark the centenary of the beginning of WWI, Malcolm Smith created The Project of Remembrance, a heartbreaking memorial to those boys and men who never returned to their loved ones.

As Malcolm said at the time: “It seemed appropriate that more should be known about the men whose names are honoured in blue and red on Frank Brangwyn’s fine memorial gracing Latymer Upper School’s Main Hall. The humble backgrounds and academic promise of many of these boys were characteristic of most Latymerians of the time and add to the pathos. Whilst the causes of WWI have long been, still remain, and will perhaps long remain controversial, the humanity, willingness to serve, courage and determination of those who fought, and those who did not return, are surely not.”