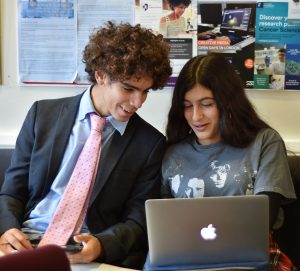 Congratulations to our Upper Sixth students who have done phenomenally well with a record number of early acceptances from a range of leading international universities for September 2022 entry.

Simon Lewis, Latymer’s Head of International University Applications said: “These results are phenomenal, particularly in a landscape of highly selective admissions to US and international universities. Our emphasis in the Sixth Form is about supporting students to find their right fit of university, and this approach is paying dividends in terms of student success.”

We are truly proud of the excellent early outcomes with 100% of candidates applying early to Bocconi having received offers and over half (58%) of our 29 early US applicants holding offers from the likes of Brown, Yale, UPenn, Columbia, Cornell and Georgetown. The range of countries where Latymerians are applying is striking: as well as the US and Italy, students have received early offers from universities in Spain, Canada, and the Netherlands.

For School Captain, Simdi, who wanted to major in Biology at MIT, it is a dream come true – and she confesses a huge relief – as she was one of just 697 students to be admitted ‘Early Action’ from 14,781 applicants from across the world applying to MIT (an admit rate of 4.7%).

Another student who has every reason to be celebrating is Nina, who earlier this month was awarded a British Empire medal (BEM) by the Queen in the New Year Honours List 2022 for her incredible intergenerational initiative, Community Senior Letters. Nina has just heard that she has been admitted to the College of Arts and Sciences at UPenn to start in the autumn.

We look forward to celebrating further exciting university news later this term as the picture develops both internationally and in the UK.