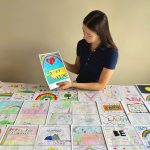 Nina was being recognised for Community Senior Letters,a non-profit community project that she set up that matches schools to care homes so that students can write letters to lonely elderly residents. Nina said: “I am so honoured to receive this award and I hope it encourages other people to get involved in this letter writing project, or in their own community, to reach out to other people who are having a tough time.”

Nina started her project in April last year just after the first lockdown, switching musical entertainment in care homes for letter writing after her previous project, Community Senior Music, was unable to continue. The aim of this letter writing project is to provide the elderly with some form of human connection to ease feelings of isolation, since the ongoing issue of loneliness has been exacerbated by COVID-19. The letters help to lift spirits and put a smile on the residents’ faces, while the students involved are able to develop valuable skills such as kindness and empathy during these uncertain times. It allows intergenerational connections to be made and friendships to be formed, building a sense of community and benefiting society as a whole.

To date, over 250 care homes and over 250 schools, both in the UK and internationally, have gotten involved, writing hundreds of thousands of letters. There have been letters sent from all corners of the globe – North America, Europe, the Middle East, Africa and Asia – with coverage in various media outlets such as CBBC Newsround, Telegraph and Independent, as well as recognition for Nina including The Prime Minister’s Points of Light Award, Children and Young People Now: Children’s Achievement Award and now this Award.

Ian from Category Sponsor, Stanhope said: “We chose Nina because she went above and beyond what you would expect a teenager at school to do. She had an idea which was altruistic and of service to the wider community as well as engaging lots of other schoolchildren in doing something worthwhile and atypical during the pandemic.  Then her achievement was to make the idea a reality and a great success in the scale of the number of schools involved and the older people who it helped. My Dad was isolated in his room in a care home with Covid and he took great pleasure in not only receiving the letters from local schoolchildren in his (other) area but also in replying to each one individually”