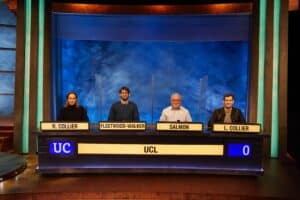 Classics teacher, Mrs Collier will be appearing on our TV screens on Monday 17 October. She and her son, Louis, were both selected to represent University College London (UCL) in the forthcoming series of University Challenge, which will be Jeremy Paxman’s last as presenter. They’ll be making history as the first mother-and-son to appear together on the show.

Whilst teaching Classics at Latymer, Mrs Collier is also undertaking a part-time PhD at UCL, researching the language of the second century Greek author, Lucian. Coincidentally, her son Louis, brother to Rosa (Class of 2017) and Zita (class of 2019) was also at UCL last year, training to be a teacher of Physics and Maths. Keen family quizzers, Rachel and Louis put their names forward to represent UCL and after a rigorous selection process, were both selected. They will be appearing on BBC2 in October.