A fantastic array of creativity was on display this evening, during Latymer’s inaugural ‘Latymer Shorts – One Minute Film Awards’ ceremony. Our budding film-makers and their families were treated to a screening shown in the Recital Hall which now doubles as a cinema. Thanks to a generous donation the space is now equipped with professional kit including a full-size 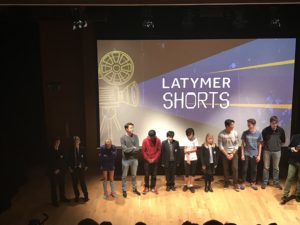 screen and state-of-the-art projection and surround-sound.

Each of the 30 shortlisted one-minute film entrants from nine categories was shown, after which the nine winners were announced. From the last nine, three were picked as overall winners, representing the Lower School, Middle School and Sixth Form.

Our judges, Latymer Governor and film producer Tracey Scoffield, Latymerians, actor Tom Hanson and Mail on Sunday film critic Matthew Bond were hugely impressed by the originality of the content as well as the quality of the editing and skilful use of music in all the films on show.

The winners were thrilled when, as part of their prize, the Head, David Goodhew gave them a day off school in early January to attend of London Short Film Festival events with Mr Bohane, Latymer’s Film and Media Manager.

Well done to all our entries!  The shortlisted films (winners in bold) and categories are listed below and can be seen here: