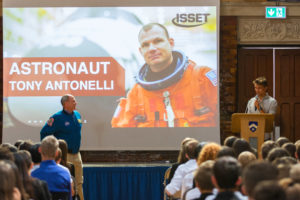 This July will mark the 50th anniversary of the lunar landing in which Neil Armstrong, the first person to walk on the moon, stepped out of Apollo 11 and memorably told the world:  “That’s one small step for man, one giant leap for mankind.”

Latymer celebrated this historic mission today with a visit from NASA astronaut Tony Antonelli.  In a series of fascinating presentations Tony, who has logged a total of 24 days, 3 hours, 57 minutes and 35 seconds in space, gave pupils a first-hand insight into his exciting experiences in space.

With a career that includes both ‘NASA astronaut’ and ‘US Navy Commander’, Tony holds degrees in aeronautics and astronautics from the Massachusetts Institute of Technology and the University of Washington and is the recipient of many awards, including the NASA Exceptional Achievement Medal, the NASA Return-to-Flight Award and the Navy Meritorious Service Medal.  He told pupils that persistence and the ability to knuckle down and study hard at school, were qualities vital for a career in astronautics:

“I believe there’s a worldwide shortage of students studying STEM subjects. That’s not to say we should have a world only full of engineers, but I would encourage you all not to decide too early what you don’t like – there’s plenty of time in the future to make those decisions – keep all options open for as long as possible.”

To illustrate his stories, Tony used short films featuring beautiful photographs of the earth seen from space including the first ever image, taken in December 1968 – “the earth’s first selfie.”   He told pupils of his experiences learning how to be an astronaut, from how to use the bathroom in space, to how to eat. As he put it, “being in zero gravity is like having a superpower – sadly it was taken away from me when I landed back on earth!   We are all living in a spaceship, flying through space – although on earth we don’t get to see a sunrise and a sunset every 90 minutes, as you do in a space shuttle!”

After the presentation, a sea of hands shot up around the Main Hall from those eager to ask Tony questions, with one Year 7 pupil asking: “what is the hardest thing to do in space?” Answer: “Never put a pencil down and expect it to remain there if you don’t attach it to a surface – gravity will see it fly around and land on the ceiling – the same goes for astronauts when they’re asleep in their sleeping bags!”

Special thanks go to Latymer pupil Luke Paterson who has organised this inspiring event for his fellow Latymerians as well as creating a space themed soundtrack for the day, played in the main corridor.  Well done, and thank you Luke!