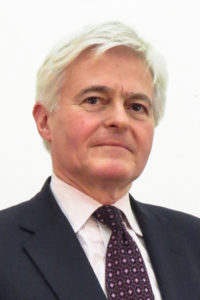 James Graham, the Latymer Foundation’s Chair of Governors, has announced he is stepping down from his current role with our School at the end of the summer term. We’re hugely grateful to James for his work for the Foundation – and welcome Ros Sweeting who will officially start as the new Chair in September.

The letter below was sent to parents, staff and alumni.

I became a Governor of the Latymer Foundation in 2004, and have been Chair of the Governors since October 2010. Last year I gave notice to my fellow Governors and to the Head that I wished to stand down at the end of this academic year, by which time I will have served a further two years after my initial term of five years. This was not an easy decision for me; I joined the school in the 1960s on a “free place” and my affection for, and debt to, the school run deep.

The school is in very good shape. This year we have had record Oxbridge offers, ‘A’ Level results and 11+ admissions. We have had a successful regulatory Inspection, opened the doors of our new Sports Centre – one of the best sporting complexes in the country – and seen our bursary programme continue to expand, thanks to the generosity of the Latymer community. Latymer continues to raise its profile and reputation as one of the most open-minded and generous hearted schools, alongside its first-rate academic, sporting and cultural achievements.

This is due to the talent, experience, ambition and hard work of the Head, David Goodhew, and the teaching and support staff, and to the dedication of the Governors. I should also acknowledge the contribution to the current success of the school from my predecessors as Chair, Richard Perham and John Bullock, and the previous Head, Peter Winter.

I am delighted to announce that the Governors have elected Ros Sweeting to succeed me. Ros has been a Governor since 2013, and chairs the Audit and Risk Committee. As the parent of three Latymerians, from the classes of 2009, 2011 and 2017, Ros is a keen and active supporter of the School and its ethos.

Ros was educated on a free place at a south London grammar school, and read law at Birmingham University before qualifying as a solicitor. She was a partner in a major City law firm, and since leaving the profession has held a series of non-executive and trustee positions including those at the Financial Services Compensation Scheme, Sport Resolutions UK and the Orange Tree Theatre. She is married to Derek, a barrister. I am confident Ros will prove an excellent choice.

I have valued my association with Latymer hugely; as a pupil, alumnus and Governor, and finally Chair. The school is blessed with a wonderfully generous and supportive alumni and parent body; thank you.