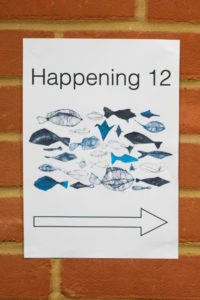 In a first of its kind and a uniquely Latymer creative event, the whole school was transformed into a series of gallery spaces for Happening 12 on Saturday 11 May.

Following a treasure map as a guide, viewers were led from the sports hall to the Main Hall, inside and outside, including every building in the school, to discover eighteen art installations, employing sculpture and video, painting and lighting.

Crossing from the Art School to the Recital Hall, where spooky ladybirds horrifically filled the cinema screen, involved climbing through a muslin tunnel, whilst below the flow from a water fountain was a mass of dissolving heads. Split screen ballet dancers cavorted across a balloon filled studio whilst next door sculpted fish swam around you in the glow and the gurgles of an aquarium. In the sports hall viewers were moved by the sinking paper boats in a film played amidst the tents and nightlights of a mocked up refugee encampment, whilst in another space we were returned to a childhood bedroom. And much much more.

The almost 200 people who joined us for the tour were treated to an extraordinary series of very personal creative visions from all of our lower sixth artists, employing an ambitious mix of traditional techniques and new media.