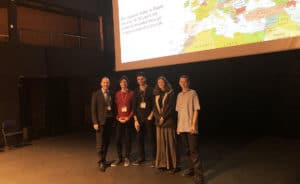 We were honoured to welcome Riadh to our Year 10 assembly today where he shared his harrowing experience of traveling to the UK as a refugee from Iraq.

Riadh’s story begins five years ago, when he was 14. His family was targeted by ISIS in Iraq, leaving them no option but to leave their home and flee the country. Then began a traumatic journey during which he lost both parents and his brother, tragically drowned at sea when their boat sank. The young Riadh was stranded for months, entirely alone in Turkey – a country foreign to him in which he had no family or friends. He finally made the long and hazardous journey to the UK where he claimed asylum as a minor and was placed with a foster family.

Now at the age of 19, Riadh has completed his education in Hammersmith and West London College and is working as a barber in Clapham.

Mr Wright, Charities Coordinator at Latymer said: “Riadh’s talk was a powerful and informative account of his experience escaping Iraq and travelling to the UK. He spoke passionately, to our Year 10 pupils who were both moved and captivated by his story. Riadh’s account of loss was heart-breaking, but his optimism, bravery and incredible resilience in the face of such hardship make him an inspiring role model for our young people.”

Ms Monahan, Head of Year 10 at Latymer said: “Riadh was of a similar age to our pupils when he experienced this horrific ordeal, which made it particularly hard-hitting for his audience. We are so very grateful to him for sharing his story with us. “