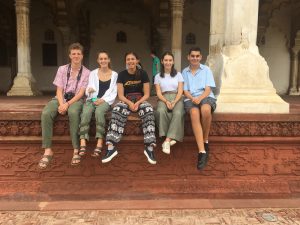 Five students from Years 11 and 12 were lucky enough to attend the Round Square conference in Indore, India last week, along with Miss Cole and Miss Desmons.

Our pupils engaged wholeheartedly with all the activities throughout both the pre-conference (29th Sept – 2nd Oct) and conference (3rd – 8th Oct). We arrived early in Delhi on the 29th, after a long flight with a stop-over at Doha (due to BA cancelling our flight), where we settled into our hotel for some lunch. Our pupils immediately started mingling with students from the 12 other schools who were also on the pre-conference tour. These included schools which we already knew such as BB&N (USA), Hotchkiss (USA), Ivanhoe Grammar (Australia), along with schools from Canada, South Africa, South Korea and New Zealand.

The pre-conference included a tour of the Golden Triangle (Delhi, Agra, Jaipur) where we enjoyed visiting all the beautiful sights and students got to make friends before the big conference. We had an evening flight on October 2, so pupils were able to catch up on homework during the day. Naomi and Priya, being some of our top running and swimming athletes, also made use of the hotel gym to keep up their fitness. We arrived at Indore where we were picked up and taken to the Emerald Heights International School where we registered. 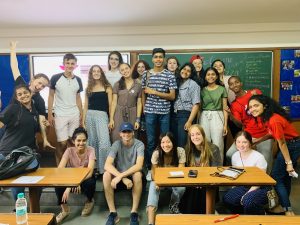 As usual, the conference schedule was jam-packed, ranging from keynote speakers (including an interview with Sophia the Robot) to service activities (our pupils went to an orphanage and a school for blind girls), a 3km race to raise awareness for the Indore Cancer Foundation, visits to monuments of historic and cultural significance (Mandu and Maheswar) and a tree planting ceremony. Every evening was themed around a different region of India, showcasing its unique local flavours as well as its musical and dancing traditions – in true Indian style, these were utterly spectacular events! We were informed that the Indian adage is to treat ones’ guests as a god and this is precisely what it felt like. In total, 700 students from 51 schools were present, making it the biggest conference to date in one location. 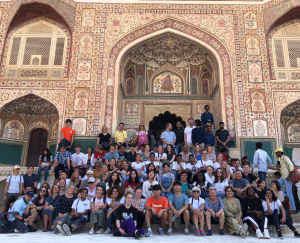 Students made many new friends and on the last day there was much prolonged hugging, emotional goodbyes and promises of lifelong friendships!

During a feedback session at the airport, the students elaborated on what they had enjoyed, and they all talked about the opportunity to meet so many like-minded people and the realisation that they have so much more in common with pupils from all four corners of the world than they realised. Additionally, they all mentioned how grateful they were for being able to study at Latymer, notably thanks to its excellent pastoral system, which they found out was quite unique. They also expressed gratitude for having such understanding parents who supported them in their life choices, rather than deciding their university and career path for them.

Overall, it was a pleasure taking these students away, who other than being occasionally punctually challenged, proved delightful company. Furthermore, they all bonded extremely well together – it was lovely to see two year groups getting on so brilliantly.