– one of UK’s top 25 influencers in independent education sector 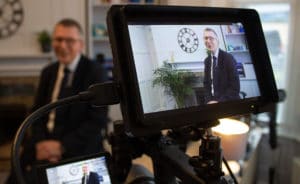 It was great to welcome a film crew from the i25 Awards team to Latymer Upper School! The crew was here to film an interview with David Goodhew, who has been shortlisted by Independent Insight magazine as one of the UK’s top 25 innovators and influencers in the independent education sector.

The Head’s nomination is for Latymer’s Inspiring Minds bursary campaign, the ambition of which is to raise £40 million to fund means-tested bursaries for 1 in 4 pupils. The i25 Awards criteria state nominees are those ‘whose innovation or influence has captured the imagination of others and changed their behaviours, improved pedagogy or school management processes, and had a measurable positive impact on children and independent education in the UK and, ideally, be replicable in other schools’.

Not only is the Inspiring Minds campaign already proving to have a life-changing impact on children at Latymer,  we’re also hopeful it will have a positive influence on other schools by providing a blueprint for more successful bursary campaigns throughout the independent sector.

An announcement of the overall i25 winner and four joint runners-up will be made on Thursday 21 March 2019.