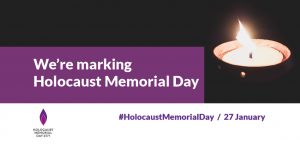 On Wednesday 27 January the Latymer community is commemorating Holocaust Memorial Day. The date marks the liberation of Auschwitz and is the day on which much of the world pauses to remember all victims of the Holocaust and comes together to stand against prejudice and hatred in our world today.

Activities and online learning resources have been organised so that students can take part from home. As well as special lesson content, members of the community have pre-recorded talks and videos to share with others across the school: two Year 9 students have created a special presentation about five people who lost their lives to racism, hatred and scapegoating; the Jewish Society has created a commemorative video in which staff and students reflect on what the Holocaust means to them; Ruth Taylor-Bell, Head of Art History, has produced a talk about the architecture of Daniel Liebeskind’s Jewish Museum in Berlin and Rachel Whiteread’s Judenplatz Holocaust Memorial in Vienna  and Ariana Neumann, Latymer parent and author of ‘When Time Stopped’, has recorded a talk which will be shared with all students as part of a special assembly. She will also be taking part in a follow-up Q&A evening, hosted by our Head Librarian Terri McCargar.

Ms McCargar has also gathered a rich collection of resources and reading lists including a virtual tour of Auschwitz-Birkenau by TCBC School Tours Company (for year 10 students and above), and a selection of historical and biographical novels, as well as history books, life stories and survivors’ testimonies so that students can find out more for themselves.

The School is encouraging Latymer families to take part in the official, national activity being organised by the Holocaust Memorial Day Trust. The online ceremony on 27 January will take place between 7pm and 8pm. As part of their #LightTheDarkness campaign, households across the UK will be lighting candles at 8pm and safely putting them in their windows to remember those who were murdered for who they were, and to stand against prejudice and hatred today.