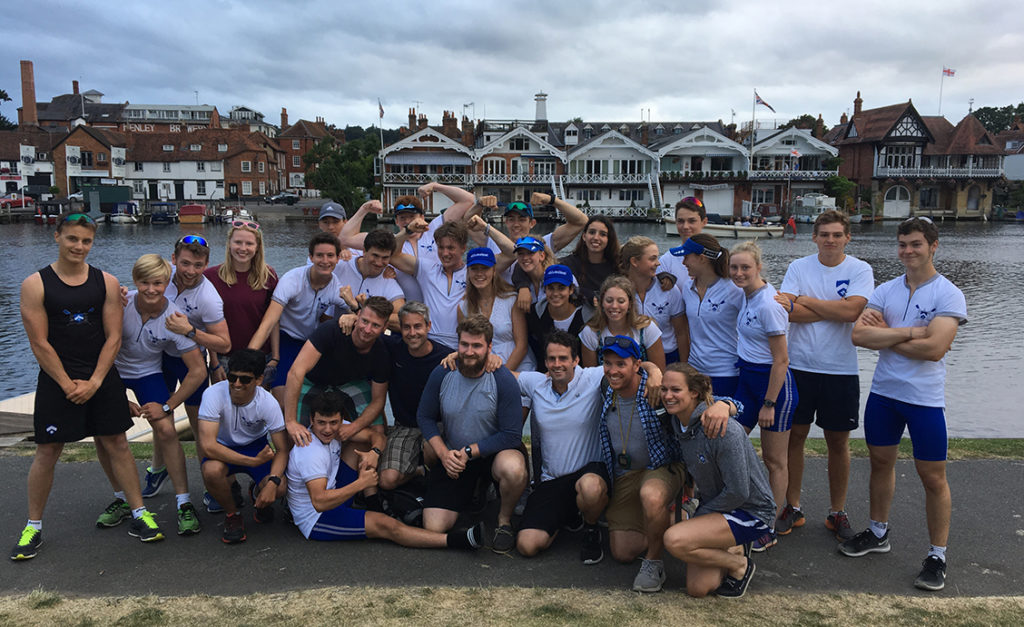 Congratulations to all Latymerians who competed in Henley Royal Regatta. This year 17 of our current pupils competed in three crews and events at the best-known regatta in the world – the highest number of crews involved from any one school.

The crews and races were as follows:

Congratulation go to all crews for their performances. It was great to see Latymer continue through to the Friday with the boys’ quad decisively beating a seeded US crew from San Diego on the Thursday; see them race here:

It wasn’t only the 17 current Latymerians competing at HRR this year – it was fantastic to see so many alumni continuing to push themselves at the top of the sport’s most elite programmes.

Ben Freeman (2015, rowing at bow) reached the final in the Temple Challenge Cup, coached by Latymerian Hugo Gulliver (2006) and competing for University of London BC (UL), after successfully knocking out Yale: https://www.youtube.com/watch?v=Z8e_wOxUwYo .

Rosie Margolis (2015) returned to cox for Edinburgh in the Prince Albert Challenge Cup having won this event last year. It was also fantastic to see Henry Fieldman (2007) bringing his extensive international experience as a cox towards driving on a young GB Men’s eight, competing against the reigning World Champion German Men’s eight: https://www.youtube.com/watch?v=RKktz3pdcXA ). This forms the start of his Tokyo Olympiad.

Latymer’s Head of Boats, Phil McGee said: “It’s heartening to see the current programme bearing fruit with so many of our pupils competing at all levels. We’re so proud of our crews – boys and girls, past and present – who have worked so hard and who have achieved so much”.

Other Latymer coaches proved they also were at the top of their game in competition. Irish lightweight Niall Kenny (78kg), rowing for Tideway Scullers, was knocked out by Stimpson (98kg) in the Diamond Challenge Cup: https://www.youtube.com/watch?v=eRCDECAeKRA ), whilst Kieran Brown also competed for Tideway Scullers in the Thames Challenge Cup. Their colleague, Sara Parfett, rowing at two in the UL & Leander (the Women’s GB eight) in the final of the Remenham Challenge Cup, showed further speed against the Kiwi eight since the World Cup in Poznan ( https://www.youtube.com/watch?v=r2xZywHuMkI ).

A 2nd girls quad was the second fastest non-qualifier, narrowing missing out on the opportunity to compete at HRR this year. With the crew made up of just one J17 and three J16s, this was a great performance and experience. The three J16s (Maddie Lloyd, Mia Andersen, Georgina Seal) were joined by Darla Matthews to gain selection as the fastest J16 quadruple scull in the country, which will form part of the Junior GB team racing France at the GB/France Match at London Docklands on 13th July.