Happy Easter from the Head

There has been much academic success to celebrate this term, and I would like to congratulate our Year 11 Mathematicians on achieving 100% A* grades in their GCSE exam in January. Well done, too, to Alex Reeves, who won a silver medal in the British Physics Olympiad.

All our Upper Sixth students have been receiving offers from some of the most competitive courses and universities in the UK, 33 of which are Oxbridge offers, and I am delighted for them. Special congratulations also go to our pupils who have received 36 offers from top US universities, 10 of which are Ivy League, and 18 offers from Canadian universities. 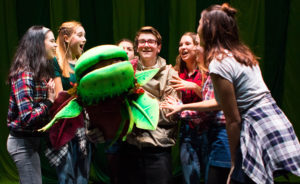 The Middle School musical – “Little Shop of Horrors” – was a fiendish delight, and it has been good to see regular LAMDA showcase performances taking place this term. The Music department has treated us to some wonderful concerts, the recent orchestral/chamber/jazz evening being a particular highlight.

Meanwhile, our sportsmen and sportswomen have continued to excel: the 2nd XI Hockey team remain unbeaten, the 1st VII netball team won silver medals in the County Final, the 2nd XI football team reached the semi-final of the London Schools’ Cup, and the J15 boys and girls were victorious in the Schools Head of the River Race. I have been especially pleased to see our Fencers achieving national and international success.

This term also saw the launch of an interactive online platform for alumni called Latymer Connects; former students are now able to keep in touch with the School and each other directly. It is already proving to be very popular as members can search for other Latymerians offering mentoring, internships and jobs; they can also share their current news, memories and photographs of their school days. Our oldest member is from the Class of 1944 and the youngest from the Class of 2017! All Upper Sixth students are invited to www.latymerconnects.com to access invaluable careers information and support from older Latymerians.

I would like to wish all Latymer families a relaxing and enjoyable Easter holiday; my second son will be 11 weeks old this Sunday and so I know you will appreciate what I mean when I say that I, too, am looking forward to a holiday!