Although we had a slightly overcast start to the day, the hot French sun soon burned the cloud off and allowed us to enjoy another cracking day on the beach at Mimosa. We spent the morning alternating between beach games and catamaran sailing with the instructors. After lunch we then had a chance to apply what we had learned by taking out the Pico dinghies in our pairs. Not everyone enjoyed the choppy waters, but the sailing was pretty exciting!

We spent the evening exploring the shops (particularly of the ice cream variety) and the picturesque harbour at Cap D’Agde.

Today was moving day and we had to pack up our stuff and relocate to Mimosa for the second half of our trip. The three-hour bus journey was a chance to escape the heat and kick back with the air con on. This was followed by a really fun afternoon at Aqualand, where almost everyone braved the big yellow slide… We all had a chance to stock up on essentials at the hypermarche and had a chance to spend our first evening here hanging out on the beach.

Everyone really enjoyed our last day on the river today: The scenery along the Ardeche has been spectacular and, despite the threat of a storm, we enjoyed another day of fantastic weather! Everyone’s canoeing skills have been coming along nicely and some of the pods backed this up with some excellent renditions of numbers from Hamilton, Les Miserables and Queen’s back catalogue! The descent down the river ended with a game of King of the Canoe, some rock jumping and a well earned ice cream. Our final evening in Segries was rounded off with a solid win in the touch rugby match against one of the other schools staying at the camp.

Enthusiasm was rife today – another gloriously sunny day with no clouds in sight! The students continued to develop their paddling skills with a number of more complex rapids to negotiate. We stopped to fight for the right to be king of the rock and learn how to slip and slide effectively on algae! At the end of the day, we went into the local town ‘Valon’ for a cheeky boule or two and to wander the local market place!

We arrived safely, bright and early after an 18-hour drive. The students were unfailingly enthusiastic and keen to get straight out on to the river, so after an early lunch we headed out to the start of the 3-day descent down the Ardeche river.  Although the temperatures were soaring, we found a very quick way to cool down on the river, spending as much time out of the boat as much as in it! 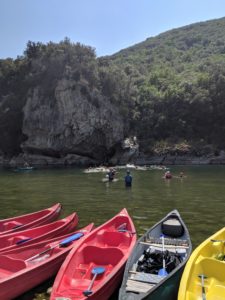 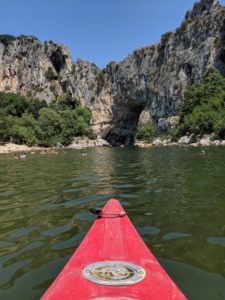 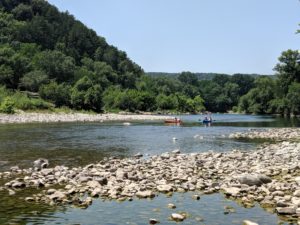 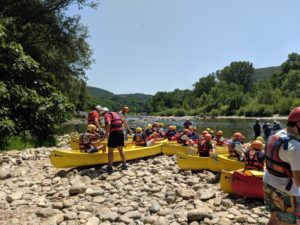