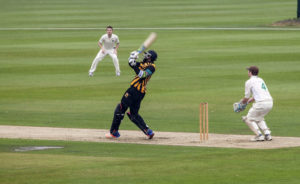 Latymer Upper School was honoured to host a charity cricket match organised by Lashings All-Stars in aid of the victims of the Grenfell Tower disaster at the School’s playing fields on Wood Lane. Cricketing greats from the Lashings All-Stars played against an enthusiastic Lords & Commons Cricket Club side on Tuesday (27th) in less than favourable weather. But the pouring rain did little to deflate the teams’ spirits, but both sides being determined to put on their best show for such an important cause. The All-Stars even found time to share some of their skills with our pupils and those of our partner schools, in a coaching session before the match started in earnest.

Latymer’s playing fields on Wood Lane are less than a mile from the Grenfell Tower and we are especially grateful to Dale Gleed, our Head Groundsman and George Tidey, Head of Cricket.

Over £5,000 was raised from the charity cricket match and will go to Evening Standard Dispossessed Fund in aid of those affected by the Grenfell Tower fire – that figure continues to grow: www.dispossessedfund.org.uk/