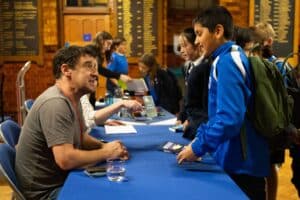 A huge thanks to popular children’s author, Tom Palmer, who visited us yesterday and  received a warm welcome from our Year 7 students. 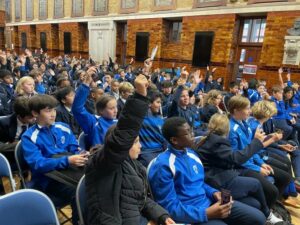 Tom has written over 55 books and has won 25 UK book prizes (voted for by children). He has worked closely and generously with many organisations to promote literacy and reading for enjoyment – including developing free teaching resources for the National Literacy Trust for schools to use with his novels for special events, such as Holocaust Memorial Day, Refugee Week or Remembrance Day. 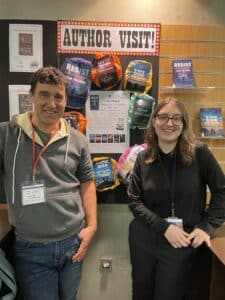 Tom is well known for his sports series – including Roy of the Rovers and Foul Play, mysteries and historical fiction – which he spoke about during his presentation. He also explained to our students how he goes about researching, writing and editing his stories. Tom is often inspired by true war stories and turns his careful research into finely crafted stories. His book, After the War is inspired by the true story of the Windermere boys, children who survived the horrors of Nazi concentration camps in Europe and were then sent to the safety of the Lake District to await news of their families and their futures. 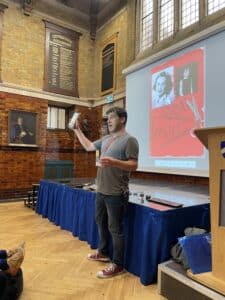 Tom’s latest book, Resist, was just published in August. It is the fascinating story of the Dutch Resistance in World War II and inspired by the true story of Audrey Hepburn’s role in the Resistance as a girl – before she became a film legend.

At the end, students had an opportunity to have Tom sign their books.