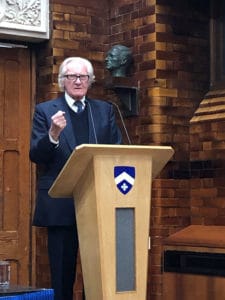 Here was a seasoned politician, giving us a remarkable insight into more than half a century of experience at the front line of UK politics; a confirmed Europhile who remembered the day Britain declared war in 1939, and has vivid recollections of a delirious public’s joy when it ended six years later.

Lord Heseltine began his talk with a history lesson; it was important to appreciate that the lives of British and Europeans had been interwoven for well over a thousand years – trading, as well as fighting battles together. He reminded us that it was the ‘cataclysmic’ world wars our great-grandparents had endured that had motivated the creation of the European movement.

A critic of Brexit, he told pupils: “It is in Britain’s self-interest to be where the power is and where the decisions are made.

“I can’t see a role for us outside of the European landmass; their problems, such as climate change, tax evasion and immigration, are our problems. If we want to solve them, we’d be far more effective in doing so with the Europeans, than on our own.….As it is we have turned ourselves from the fastest growing to the slowest growing economy in Europe”

Lord Heseltine answered questions from the floor in his customary forthright fashion. Asked if we should have a second referendum he responded: “Why not? People didn’t know what they were voting for first time around. The deal should be put to the British people now that we have more of an idea what it is, so that they know what they’re voting for.”

He was scathing towards those, namely Boris Johnson, who criticise European regulation. “Regulation is the embodiment of a civilisation. If we were ‘free’ we’d be beating each other over the head with clubs! We need regulation to be tight otherwise there will always be an easy way in which to break the law.”

On David Cameron, Heseltine was less critical, citing him as one of the best prime ministers he had worked under. “But”, he said, “as with John Major, Cameron was under pressure from the Brexit wing of the Tories. He paid the price for giving them what they wanted.”

Lord Heseltine told the audience that the voting pattern of the UK’s older generation was roughly 70% for Brexit and 30% against. The younger generation’s votes were the exact opposite, with 30% for Brexit and 70% against. He concluded with a prediction: “My own view is that as the older generation dies out, the new generation will have more votes and will want to re-join the EU in ten to twenty years – assuming we do leave next year. They do not have an appetite for hatred. We will go back because that is where the power lies.”