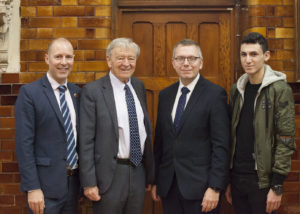 The Main Hall was abuzz with anticipation this morning as Latymer Upper’s sixth form awaited a talk from Lord Alf Dubs and Ishmael Hamoud on the plight of refugees. They were not disappointed; our guests spoke passionately about the need for more to be done to support refugees – a social issue close to Latymerians’ hearts and one they are focused on supporting this academic year.

Both speakers have experience of being refugees who travelled as children, unaccompanied, to the UK; Alf Dubs came to England from Czechoslovakia alone, aged 6, to escape Nazi persecution at the beginning of WWII – he was one of the 669 Czech Kindertransport saved by Sir Nicholas Winton; Ishmael Hamoud left Syria aged 15 and travelled by himself across Europe to Calais, where he remained until he received safe passage to the UK. The long journey was, he told pupils: “one of the most horrible experiences in my life.”

It is at the point that Ishmael arrived in Calais that our two guests’ stories connect. The help Ishmael received in gaining entry to England was via Alf Dubs’ amendment to the Immigration Act 2016 (referred to by the media as the ‘Dubs amendment’) which aimed to give unaccompanied refugee children safe passage to Britain. Ishmael was one of the first children to travel to the UK after the Dubs amendment was accepted by the government.

Both speakers stressed the need for our government, and those across Europe, to do more to help all refugees, in particular the young and vulnerable for whom life as a refugee can be so perilous. And both agreed that hope is crucial; lack of hope is the worst state of mind for humankind. Without a feeling that life will get easier and that there is a future worth living for, it’s almost impossible for the human spirit to prevail. As Alf Dubs said: “If you have no hope, you just exist. We have a moral responsibility to help refugees; there is still much to be done.”

Both our guests’ stories are remarkable. Ishmael has been in the UK for two years now; in that time he has gained A levels and is currently studying for a degree in international politics at Birkbeck, with plans to study for a second degree, in law. As he told pupils: “It’s important to believe in yourself; you can do the impossible stuff – and by yourself too – if you can only believe in yourself.”

Lord Dubs has spent most of his life in politics – as a Labour MP and, in 1994, as a peer in the House of Lords. He is dedicated to lobbying government for support of refugees and was heartened by Latymer’s involvement in supporting the charities Care4Calais and West London Welcome; “I congratulate your school on the good work it has done for refugees, from the bottom of my heart; it’s terrific to see what you’re doing to help. I would encourage you all to contact your local MPs and ask what commitment they have made to help refugee children. Keep pressing – public opinion is so important in this issue.”

Mr Daniel Wright, charities coordinator (pictured above with Lord Dubs), said, “We are tremendously grateful to Alf and Ishmael for giving up their valuable time to come and talk to our Sixth Form. The content of their talk and the call to political action complements the experience that 90 of our students have had whilst volunteering for Care4Calais in northern France and ‘West London Welcome’, a local refugee charity.”