It was even sunnier today!  The waves were perfect for a surfing competition in the morning. Students attempted the longest rides on a wave and tricks such as 180 degree turns, nose taps, cross step board walking, and much more. Then we constructed a huge raft made of surfboards and challenged each other to run all the way along them. Special mention to Nelly Laycock who made it all the way to the end in style!  After lunch, the waves were very flat, so our experienced instructors took us on a paddle over to a beautiful, tranquil cove which we had almost completely to ourselves. The waves here were bigger, so some continued surfing, whilst others enjoyed the stunning surroundings on the beach.  After paddling back to the main beach, prizes were awarded at the Kingsurf beach shack. Everyone got a certificate and Kingsurf sticker, and an inspiring speech from the head coach (and bundle of positive energy), Pete. He described them as: “the best school group we have EVER had – a bunch of absolute legends!”  Tamsin Sandhu, Kitty and Jennifer won the prizes for most improved surfers.  Luke won the prize for the best tricks. Max won the prize for longest and most stylish wave ride.  All prize winners received KingSurf rash vests.

The evening entertainment was a quiz, won by the formidable team of Uma, Hebe, Fred, and Emre!

Another sunny day surfing – both in the morning and the afternoon with even better (more manageable) waves today!   The students’ skills have really improved, with many standing up on their boards and shredding the waves in style.

Ravenous appetites were more than satisfied by a lovely lunch at the Merrymoor Inn overlooking the beach at Mawgan Porth.

We enjoyed a game of beach rounders in the evening, with the crown for today’s team competition winners going to Miss Hussey’s team!

The weather is even better today than yesterday!  We spent half the day coasteering along the rocky shore,  with those brave enough opting to jump into deep waters from the 20ft ledge!  The other half of the day was spent surfing on some gigantic waves!

The evening activity was a beach football tournament, which was won on penalties after a tense 1-1 draw, by Miss Weldon’s team!   A special mention must go to Jago Campbell for some incredible diving saves and to Matthew Wood for some top class finishing to secure the win!

All that football put us in the mood for watching the England Lionesses take on the USA in the World Cup semi-final.   After building up our appetites with a day’s surfing, coasteering, and football, we were ready to enjoy traditional Cornish pasties for dinner. 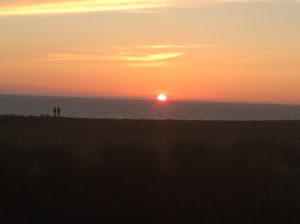 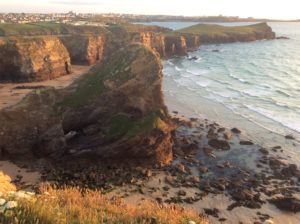 We arrived on time and settled into the hotel before heading off to inspect the beach – needless to say, it’s fantastic!  We then enjoyed a lovely walk along the headland and savoured the stunning views.

Some energetic beach games followed before we moved on to the serious challenge of the Sand Castle Building Competition! The theme was “famous British landmarks”. All four castles were impressive: Bodium castle (their year 7 history trip there clearly made a lasting impression), Windsor Castle, Stonehenge, and the O2 arena.  And the winners were…… Mr Wright’s team, who clinched victory by one vote with their structurally impressive O2 arena!